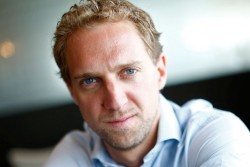 Mathieu Roy is a Montreal-based filmmaker who works in both documentary and fiction. For the last decade, he has traveled the world while collaborating with a number of inspiring artists, including legendary filmmaker Martin Scorsese. After a degree in Political Science and a brief stint in journalism, Mathieu Roy enrolled in the filmmaking programme at the New York Film Academy in 2001. In 2002, he entered Montreal’s National Film Institute (INIS) where he directed four short films and also met François Girard becoming a close collaborator. In 2003, Mathieu was hired as Martin Scorsese’s personal assistant for the filming of The Aviator. In 2005 his film François Girard’s Three-Act Journey was awarded the Prix Gémeaux for the Best Cultural Documentary. In 2006, he directed La Peau de Léopard, a documentary on the Israeli-Palestinian conflict featuring Québécois iconic journalist Pierre Nadeau. In April 2009, at the opening of the 27th International Festival of Films on Art (FIFA), Roy presented Death in Venice, a musical journey with Louis Lortie. The film was awarded the Prix du public ARTV and also screened at the Louvre, in Paris, and at the prestigious Morgan Library in NYC. In the summer of 2011 Mathieu completed Ecclestone’s Formula, a critical documentary about Formula One supremo Bernie Ecclestone. His documentary feature Surviving Progress (2011) is a reflection on the dark side of the ideology of progress and the future of our civilization. It premiered at the Toronto International Film Festival and also traveled to important film festivals (IDFA in Amsterdam, DIFF in Dubai, FIFE in Paris, Ambulante in Mexico City, Planet Doc in Poland, Turin, Rio, Moscow, Göteborg, Tokyo, Goma, Kuala Lumpur, Bogota Vancouver, Mumbai). In 2013, Mathieu made his first fiction feature Another House, a family drama dealing with Alzheimer’s disease visit https://カジノ777.com/pachislot/blood-suckers-2/.